IFTTT — If This Then That — allows greater connectivity between various services. It connects with a large number of different services (160 as of this writing). Everything from your phone’s text capabilities to your e-mail to your Twitter to your LinkedIn can be hooked through IFTTT. This post, however, focuses on using IFTTT to facilitate social media sharing across networks.

Please note, I haven’t personally tested every recipe linked to in this post. You’ll have to do some experimenting of your own. Any recipe that has its own dedicated section with a linked example post on social media, I’ve used and can personally recommend, though!

Native cross-network sharing features are okay — but aren’t always best, either. For example — following some kerfluffle between Twitter and Instagram, Instagram images no longer show up in Twitter as preview images when using the native sharing feature. The example image shows Pinterest’s native Twitter sharing. Super attractive, right? Yeah, nope. An image and a description would make that tweet way, way more clickable. 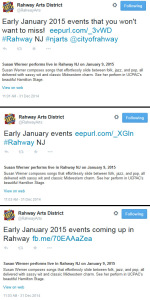 One clear advantage of using IFTTT is that you see all network connectivity from a single place. Duplication of posts on social media can be seriously annoying to your followers, and it’s sadly very easy to end up with this if you’re using native sharing and an outside service.

See the example image for what can happen — this account has shared the same link three times within three minutes on their Twitter, likely because they’re using native Twitter to Facebook sharing as well as a third-party service.

Using IFTTT for connectivity, you can see all connectivity in one place. Turning off duplication is as simple as disabling the offending recipe in the dashboard: you don’t have to hunt down duplicate connections between all of your networks and figure out where it’s coming from. You don’t have to worry about having to dig through Facebook to Twitter to find your Twitter settings when it’s really Twitter to Facebook that’s messing with your sharing. 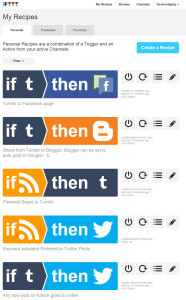 A second advantage of IFTTT is its simplicity. You aren’t poking through Facebook tabs or getting distracted by Instagram account settings. All you can do in a recipe is just what the title says: take a post from Tumblr to Twitter, repeat a Facebook post to Twitter, etc. You don’t have to worry about hooks to seven different accounts under one recipe; the big image showing one service connecting to the other is really helpful in understanding what the heck a recipe does.

Additionally, there are very few extraneous settings and confusing buttons and weird settings on IFTTT. It’s very easy to use, and does the connecting for you! 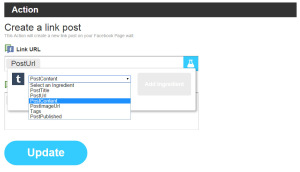 When creating recipes, you can often use “ingredients.” In the example image, see what you can pull from Tumblr when reposting to Facebook. You can customize your recipes to what you need to pull in from outside services.

Please note that you should definitely look at the ingredients. The recipe author can put whatever they want there. If you’re linking to a random person’s content, you aren’t being hacked — you probably just didn’t remove the link the author included in their recipe. Go into IFTTT and edit the recipe, removing the offending content.

IFTTT makes it easier to avoid account cross-posting mistakes: you can just make a separate IFTTT account for each brand. Use a Firefox Private Browsing or Chrome Incognito window to set-up your accounts. This helps to make sure you are linking the correct accounts.

Take note, however, that IFTTT isn’t all-powerful. You won’t find ways to post to Instagram via IFTTT, because there are presently very, very few ways to post to Instagram except by the native phone app and some seemingly-Instagram-sanctioned services such as Latergramme. I think this is because Instagram has some specific requirements for photo sizes, etc. and there’s no guarantee your WordPress featured image is going to be the size an Instagram image is.

An Update from Don in the Comments!

“Use IFTT to route any rss of your choice to Buffer, then Buffer to Google+. It is a bit clunky depending on you que setting on Buffer, but it works!” Haven’t tested this myself, but I have heard this from other sources. Pretty good bet!

Google+, too, is annoying: there are very few ways to share to Google+, and recipes I’ve tried on IFTTT haven’t worked for me, unfortunately. So — yes, you may still have to share manually to Instagram and Google+.

It’s also still important to establish a chain of connectivity that makes sense for your content and posts. It wouldn’t make sense to go from WordPress to Twitter to Tumblr, and then have Tumblr repeating back to Twitter. That’d result in duplication, potentially three ways, to one network (Twitter). You can still wind up accidentally doing this on IFTTT. Fortunately, it is much easier to fix on IFTTT, as aforementioned. There’s no digging through three different accounts to find the issue.

Note: when testing recipes on IFTTT, you can use the “Check recipe” button to process the recipe and see if it works immediately. You don’t have to wait for this timeperiod to pass while testing out new recipes.

IFTTT is also not instantaneous. It may not be the service for you if timing is very important (e.g., live-tweeting an event). Sharing has taken up to 45 minutes for me before on certain services.

Instagram natively allows sharing to Twitter. Unfortunately, I could not get it to work using my Android app. My photos just never wound up on Twitter. Additionally — in every instance I’ve seen the native Instagram to Twitter posting, it does not include the preview image. Including a preview image on Twitter, showing up in the Twitter desktop and mobile applications, Tweetdeck, and other Twitter readers is important. Tweets that have images tend to have higher click rates, and showing the image preview can be an absolute necessity if your primary purpose in posting to Instagram is sharing image-based content.

WordPress to Twitter is another IFTTT recipe I like. It automatically broadcasts any posts made to my WordPress blog to Twitter, including a link to the blog post and it’s title. See the result. You can add hashtags to your customized recipe, too, and the Ingredients for this particular recipe also includes the ability to use your WordPress featured image, the publishing date, tags and categories, and so forth.

Again — although there are a billion and two ways to post from WordPress to Twitter via plugins, IFTTT is one of the easiest ways to do it. Every time I’ve had to use a WordPress plugin to repost to Twitter, it also involved going to Twitter’s developer site to generate API keys. IFTTT, on the other hand, hooks directly into your WordPress blog — yes, self-hosted, too — and Twitter accounts, and does everything automatically. This is a much more manageable process for most people.

Tumblr to Facebook Page allows you to mirror Tumblr posts to your Facebook pages. You can select which page you use — and never worry about accidentally posting to a personal Facebook account again. See the result.

Tumblr to Twitter is a neat recipe. It mirrors the post’s title and a link to that post — see the result. You can again use ingredients to customize the output.

See Collection of 40 Recipes to Streamline Social Media for a number of recipes that are well-liked and well-used on IFTTT related to social media. You’ll find something to your use there. I’ve had tons of success just typing the names of two different services I want to connect into the search bar, too. Twitter has 30,000+ recipes alone, for example.

As mentioned before, IFTTT is extremely powerful and does way more than just social media. You can have Gmail e-mails with a specific label add to a Trello board, Google Calendar to SMS, automatic LinkedIn jobs to Twitter, add new Twitter followers to a spreadsheet, autolog Android work arrivals and departures to a spreadsheet, and way, way more automation via IFTTT.

Get it? There are many tools you can use for organization and productivity — and automating the connectivity between these tools can be huge in making your workflow more productive. So — go enjoy IFTTT, I have!